So, you’re a top promoter. You’ve run successful festivals across Europe and the Americas. You’ve done mainstream, electronic indie, folk, rock and even country. You’ve even gone upmarket, selling smoked brie to marketing managers in designer wellies, over the sounds of the specially flown in Senegalese four piece.  Time to break into the Asian Market and in particular China – literally the biggest market on planet earth, and they love everything western don’t they? Pick up a success story, lock stock and barrel, rebrand it Rorraparooza and job done. Yes, and no, but mainly no. Yes, China is potentially the biggest market in the world. It has a population of 1.3 billion people, around three quarters of which listen to music regularly. And there have been success stories, where a renowned western band has gone in, sold out and come away smiling. But there have been more cases where that has not been the case. The reasons for that are many and varied. Getting There First of all, logistics wise, China is a vast country – second largest in Asia (second only to Russia) with an approximate size of 9.6M KM2. What goes on in one part is pretty much ignored by the rest of the country. Unless you plan on touring for the best part of a decade you can shelve plans of “breaking China”. Moving stages from one end of China to the other, while sourcing the appropriate technical rider needed from multiple cities and countries, while still complying with the artists’ requirements is not only difficult but is in reality, truly moving mountains (literally and figuratively). It’s also not as easy as renting 18-wheelers to transport the gear from one end of China to the other, most cities and provinces have their own entry and exit permits for items coming in and out which need to be obtained weeks prior to entry. Added to that, it’ll take at least a day or two of clearing per entry and per exit. Unless you have multiple sets of gear, or willing to do shows every fortnight rather than every second day, you might as well get spot dates and fly (private if you can). Also permits and visas are on a different level than anything you will have experienced before, unless you were behind the unsuccessful attempt to take Slipknot to North Korea. There are working visas, travel visas, public safety board certification, and others that take nearly 6 weeks for approval per city. First of all, you’ll need three types of letters, letters that need to be issued by different levels of government and all with different types of requirements (artist set list & lyrics for one): Once you have these letters, and assuming there’s been no denial, you will need to take this approval to the Artist’s nearest China Embassy in their home country to get issued the one-time entry working visa. Added to all this, once the visa is approved and issued, it can be just as easily terminated depending on the artist’s public actions leading to an event. Whether it be the government’s change of heart due to the artist’s lyrics or their political or religious associations, a terminated working visa can come days after issuance or days before the actual event. We can note a number of high-profile cancellations in the last two years: Bon Jovi, Maroon 5, and Selena Gomez a few months ago to name just a few. These issues can be overcome, but needs to be considered, and organised and politicized with local relationships. And most important, the artist must know in advance of what they can and cannot do, leading to an event (politically and publicly speaking of course). Don’t assume anything and don’t go at it alone. 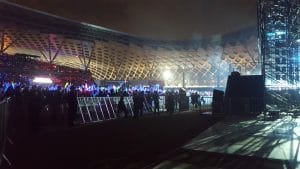 Getting to the People That goes for the audience as well. The audience in China is simply different from the west. Fans are fans are fans, but… fans and audiences are not necessarily the same thing. That is not a bad thing, it is just another thing you need to be aware of, and prepared for. They are fickle and unpredictable. What has worked before for someone else does in no way mean it will work again. In order to organise a successful gig, event or festival in China – and all of Asia to a lesser extent – you need to embrace two concepts. Experience and Localisation. Let’s deal with the first of those. If you don’t have experience, and I mean a lot of specific experience of organising similar events, not just in China, but that part of China, then forget it. You need to find someone who does, and someone who has contacts, as many as possible. It is essential to get local government buy in, and that is something you need someone on the ground for. Localisation is something that will make or break the event. Only around 10% of music derived revenue in China comes from non-Chinese-language music. To market an event, to get people through the door, and to get them to stay, you need local bands. And not just a token band or two to open the set while most people are still considering what top to wear. They need to be prominent, maybe more prominent than your “star” act. Of course this comes with its own problems, if the “star” act’s ego managed to get through customs.  Localisation also applies to the way the event is run, from the initial promotion down to the actual operation. A 100% western approach will not work, you need to have local operatives in each aspect of the setup, working with you to prevent you from forcing a square peg (albeit a fantastic square peg) into a round hole. But regardless of all of this, China is an amazing place to bring music to and it has enormous untapped potential. Similar to how the film industry is now, the East is the new “in thing”. With 1.3 Billion people, even getting 0.01%, yes 0.01%, of the population to attend your $10 events is $130M USD in revenue. I’d gladly take the chance to do so. You just need to know how to go about tapping it.     Mike Pio Roda Managing Director – Pinnacle Live Concepts
1